In the last few months, I’ve been thinking a lot about online harassment. Even writing that sentence, I come face-to-face with my own privilege, as ‘online harassment’ is something I’m able to elect to think about rather than an unavoidable feature of my use of the internet. But the evidence is clear that online harassment is ubiquitous. A 2014 Pew Study found that 73% of adult internet users have seen someone be harassed in some way online and 40% have personally experienced it:

The witnessing figure from this US study interests me because it suggests that most internet users must be aware of the reality of online harassment, even if they seek to explain it away to whatever extent. The study makes a distinction between two categories of online harassment:

In Pew Research Center’s first survey devoted to the subject, two distinct but overlapping categories of online harassment occur to internet users. The first set of experiences is somewhat less severe: it includes name-calling and embarrassment. It is a layer of annoyance so common that those who see or experience it say they often ignore it.

The second category of harassment targets a smaller segment of the online public, but involves more severe experiences such as being the target of physical threats, harassment over a sustained period of time, stalking, and sexual harassment.

The Pew study found the distribution of these experiences to be structured by gender and age. Young adults (18-29) as a whole are more likely to experience either category of harassment but young women (18-24) are overwhelmingly the targets of the more extreme behaviours: 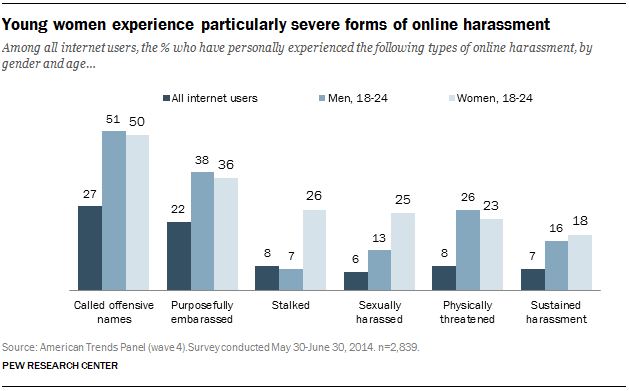 But the gendering of these experiences, shouldn’t lead us to dismiss the ‘lesser’ category of harassment. This too can be gendered, in its cumulative and ubiquitous character, as Audrey Watters conveys on loc 1771 of her Monsters of Educational Technology:

There’s a complexity to this behaviour which the Pew study doesn’t capture. It recognises that these behaviours are much more common on such platforms than others, but it doesn’t attempt to look at these divergences demographically in terms of use of platforms. It’s important to recognise that certain online environments are what we might think of as ‘harrasogenic’ in a way that’s susceptible to explanation, including though not limited to deliberate choices by the companies in question to calibrate the architecture of their platforms to maximise attention, engagement, return etc in line with commercial incentives:

The mechanisms available within a platform to respond to harassment are a clear function of those choices, as well as shaping the character of the platform through parameterization of harassment and responses to it. The Pew study found that low-level harassment tended to lead to single-step responses and high-level harassment tended to lead to multi-step responses. Surprisingly, 75% of those who responded thought their decision made the situation better, though it raises an obvious question of the distribution of this experience between the two categories.

When seen against this background, the drive within universities to incite academics to engage online can seem rather problematic. As Tressie McMillan Cottom puts it “the risks and rewards of presenting oneself “to others over the Web using tools typically associated with celebrity promotion” (Barone 2009) are not the same for all academics in the neo-liberal “public” square of private media.” The increasing levels of political polarisation, as well as the specific problem of organised conservative and alt-right groups seeking to highlight what they deem to be problematic academic speech online, reveal how this issue is intensifying. Given, as Tressie observes, universities use “engaged academics as an empirical measure of a university’s reputational currency” online harassment must be seen as a central issue of academic freedom and academic labour.

We need to understand this issue in terms of broader structures of oppression, while also recognising the specific characteristics of digital environments that set the parameters of its online manifestations. From loc 1677 of The Monsters of Educational Technology by Audrey Watters:

Harassment – of women, people of color, and other marginalized groups – is pervasive online. It’s a reflection of offline harassment, to be sure. But there are mechanics of the Internet –its architecture, affordances, infrastructure, its culture –that can alter, even exacerbate what that harassment looks like and how it is experienced.

From loc 1843-1865 she takes apart some of the facile responses this issue can receive:

The answer can’t simply be to tell women to not use their real name online. If part of the argument for participating in the open Web is that students and educators are building a digital portfolio, are building a professional network, are contributing to scholarship, then we have to really think about whether or not promoting pseudonyms is a sufficient or an equitable solution. The answer can’t be simply be “don’t blog on the open Web.” Or “keep everything inside the ‘safety’ of the walled garden, the learning management system.” If nothing else, this presumes that what happens inside siloed, online spaces is necessarily “safe.” I’ve seen plenty of horrible behavior on closed forums, for example, from professors and students alike. I’ve seen heavy-handed moderation, where marginalized voices find their input is deleted. I’ve seen zero moderation, where marginalized voices are mobbed. The answer can’t simply be “just don’t read the comments.” I would say that it might be worth rethinking “comments” on student blogs altogether –or at least questioning the expectation that students host them, moderate them, respond to them. See, if we give students the opportunity to “own their own domain,” to have their own websites, their own space on the Web, we really shouldn’t require them to let anyone that can create a user account into that space. It’s perfectly acceptable to say to someone who wants to comment on a blog post, “Respond on your own site. Link to me. But I am under no obligation to host your thoughts in my domain.”