Being Human and Social Normativity 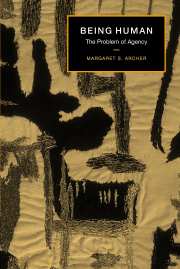 In my last two posts on Being Human I discussed Archer’s account of emotions as commentaries on human concerns and her analysis of natural, practical and social affectivity. In this post I’ll explore her understanding of social normativity in greater detail before moving onto a discussion of the transition from first-order emotionality to second-order emotionality in a post next week.

From the realist point of view, normative conventions are not like some version of the social contract which acquires powers from its signatories, having none prior to this notional compact. Instead, such conventions and agreements are themselves culturally emergent properties (CEPs) which derive from past chains of interaction, but which, in any contemporary context, are pre-existent to, have relative autonomy from, and exercise causal efficacy over the present ‘generation’ of subjects. Individuals confront them, they do not create them, although they may transform them.” (Archer 2000: 218).

On this view social norms tend towards the production of regulative effects within society but, contra Elder-Vass, Archer cautions against conflating the ‘attempt’ with the ‘outcome’. She offers a view of well established norms “as a template which is slid across the total array of actions exhibited by members of society at a given time” which serves to “both categorise our action and attach evaluative judgements to them”. This represents certain behaviours or relationships to subjects as “being offensive, morally reprehensible and normatively unacceptable, above and beyond their legality” (Archer 2000: 218). These evaluative standards are emergent from past interaction and impinge upon present interaction, through which they are either transformed or reproduced. However the efficacy of these standards depends upon their subjective reception i.e. to exercise causal power we have to feel good if we live up to them or feel bad if we fail to meet them. Archer contrasts this to something like a traffic fine, which “operates as a simple deterrent which does not rely upon the internalisation of a normative evaluation” (Archer 2000: 218).

The punitive reactions which can be attached to a negative normative evaluation of our behaviour can certainly influence our actions but crucially it is our anticipation of the sanction which is exercising causal power rather than the normative standard as such: “for social evaluations to matter – and without mattering they are incapable of generating emotionality – they have to gel with our concerns” (Archer 2000: 219). So our evaluative capacities as deployed throughout our biography become crucial to understanding how subjects respond to the normative register they encounter at a given point in time. This is an objective phenomenon but not a homogenous one, as it emerges relationally and its reproduction or transformation is dependent upon the shifting orientations of evaluative subjects. The emergence of social affectivity requires more than a normative register and a continual stream of evaluations being passed on the comportment of fellow subjects: it requires that those norms actually be endorsed by people. This is the distinction between the power relation and a normative relation. If P1 does X and an indignant P2 does Y in response then the objective consequences of Y must be negotiated by P1 regardless of what they think of P2’s underlying motivation. However if P1 shares P2’s commitment to the underlying norm which motivates Y then the simple operation of power (the need for P1 to circumvent or otherwise negotiate the response of P2 to their action) becomes more complex, as P1 recognises themselves to have fallen short of a shared standard in their encounter with the action of P2 which has been motivated by that same standard.

As discussed in previous posts, Archer sees affectivity as arising in relation to our concerns. Environmental threats move us affectively because of our underlying concern for bodily well-being. The feedback we receive from objects in virtue of their material affordances and constraints pleases or frustrates because of our generic concern for performative achievement. In keeping with this relational view of affectivity, which sees it as emergent from the interaction between our subjective concerns and objective environment, she argues that the “most important of our social concerns is our self-worth which is vested in certain projects (career, family, community, club or church) whose success or failure we take as vindicating our worth or damaging it” (Archer 2000: 219). So the distinction here is between the normative evaluation of our discreet actions (e.g. someone finds offence in my unthinking choice of terminology while engaging in idle conversation about a topic of no great importance to me) and the normative evaluation of the projects within which we have invested ourselves (e.g. someone finds offence in how I have characterised asexual people in an journal article). For instance my own experience of the former is to either not care or find it mildly irritating or thought-provoking whereas my experience of the latter is to be deeply troubled by it.

In the first case the normative evaluation either does or does not resonate with my own evaluative dispositions but in the second case it troubles me because I’m deeply invested in the project which is receiving negatively evaluation. My prior commitment to the project serves to intensify the affect arising from someone normatively evaluating my comportment on the basis of a standard that I myself endorse (e.g. maintaining fidelity to the lived experience of research participants). Or this is what I take Archer’s argument to be at least. The notion of ‘social self-worth’ as a generic concern isn’t spelled out as clearly in Being Human as the analogous notions of physical well-being and performative achievement are. It also seems to reduce the significance of our projects into a narrowly social register in a way which obscures the complex assemblage of commitments which I can introspectively point to when reflecting on something like my own project of being a sociologist. I suspect she means something akin to a distinction between internal goods and external goods here i.e. we are driven either by the standards internal to a practice (practical affectivity) or the recognition of our achievement by others (social affectivity). But the distinction seems somewhat overdrawn if so. I’m going to think about this later when continuing with my data analysis.

4 thoughts on “Being Human and Social Normativity”