My notes for the opening talk at The Sociological Review’s Thinking on the Move conference, co-organised with Emma Jackson, Les Back and Jenny Thatcher.

I feel like a fraud talking in the opening session of this event because there’s no sense in which I’m an expert on sociological walking. This is obviously compounded by talking alongside two people who clearly are. But it’s something I’ve been interested in for a long time in a very specific way so I thought this would be a good opportunity to articulate exactly what that is and how it came about.

My first encounter with sociological walking actually came from Les in 2012 when he suggested a walking tour in south east London to reflect on the riots that had taken place the year before. I was editor of the LSE’s British Politics and Policy blog at the time and with Cheryl Brumley, then digital editor in the group, we joined Les for an afternoon in Catford. The resulting podcast and digital map was one of my favourite things I’ve help produce in almost ten years of doing social media professionally. The second encounter was with an economic geographer who took us on an incredible tour of Lower Manhattan a few years after Occupy Wall Street, reflecting on events he had been a part of. In both cases theoretical insight, ethnographic detail and personal narrative were combined with a force and unity that would have been impossible if this had been a talk in a lecture theatre, let alone a piece of writing. The third encounter was a theoretical walk with Maggie O’Neill in which we explored the accelerated academy by walking slowly through it. These three walks sparked a sociological enthusiasm for walking in me which felt like it needed to go somewhere. But apart from leaping on any opportunity to go on an organised walk since then, I had no idea where this somewhere might be. In a vague sense I imagined walking as a form of public engagement and public sociology but I struggled to articulate this beyond pointing to how enjoyable they can be.

This was a period of time in which I worked for The Sociological Review and became interested in the long history of the journal and what it revealed about the shifting fortunes of the discipline. I was fascinated to discover the Foundations of British Sociology archive where so much of this history was documented and began conspiring to find reasons to go to the archive, including an event we ran to promote its use as a resource for the discipline. I was immediately struck by how many of the conversations in the 1910s and 1920s I saw were mirrored in the conversations we were having now. What is sociology for? How do we ensure research helps us understand the world? How can understanding the world help us change it? But what really caught my attention was the role that walking played.

I’d understood that walking had formed a part of the sociological methods of the time in a mixture of physical geography, ethnography and sociology which is jarring to contemporary disciplinary sensibilities. They saw the physical landscape within which humans lived and worked as a foundational factor to which a form of life must be adapted. What they called ‘rustic surveys’ began with geophysical, geological and climatological studies beyond a settlement before turning to what we now think of as the social. Walking was equally prominent in their civic investigations within cities with an orientation towards how life unfolds within the totality of a region. What I hadn’t understood though was how residents of the region were not framed as respondents but as active participants in the survey, including but not limited to walking, constituting  what we now think of as citizen social science.

I was even more intrigued by the discovery that Le Play Educational Tours conducted at least 70 overseas trips and at least 10 within Britain. These were intended to inculcate a sociological sensibility in participants and, as I understand it, represented a more user friendly version of the fuller survey methodology. These tours produced reports, maps and slides which are still in the archive at Keele. These give a little sense of how the tours were advertised: 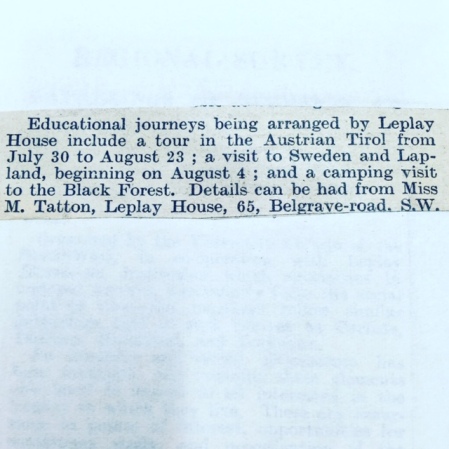 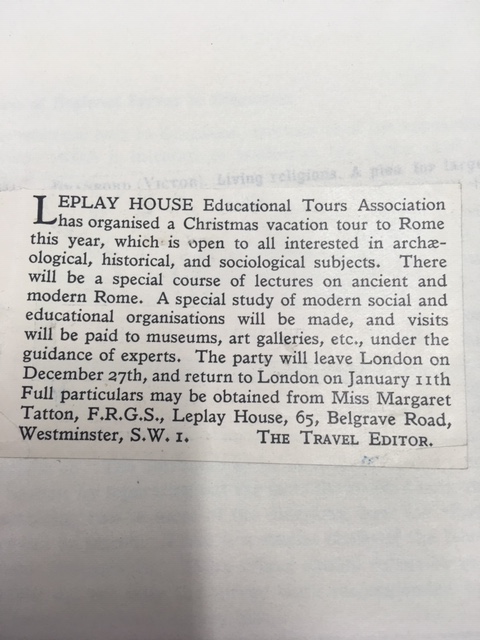 For many years the predecessor organisation to The Sociological Review Foundation was running what we’d now call a social enterprise. This strange amalgamation of travel firm and educational initiative appears to have been remarkably successful. It was making money and seemingly attracting a significant amount of public interest for what must surely have been seen by many as an obscure initiative.

However it ultimately unravelled, as a remarkable MPhil thesis by David Evans explains, with Margaret Tatton, who lead the organisation of the tours, leaving due to a combination of personal and intellectual disputes. Interestingly, the growing distinctiveness of geography played a role in this, with the tours becoming orientated towards geography at a time when it had a much stronger institutional embedding than sociology. As personal relationships deteriorated so too did collaboration on the tours and this ultimately prefigured a splitting off into a more explicitly geographical organisation Le Play Society, which existed until 1960 though was no longer embedded in the thriving community of LePlay House.

I find it hard not see a lesson here. One of the questions I hoped we’d address is What does it means to walk in a distinctively sociological way? However discovering the role the rivalry between geography and sociology played in the partial unravelling of such a remarkable organisation as Le Play Educational Tours serves as a reminder that we shouldn’t be too concerned about what it means to walk sociologically. This history also leaves us with other questions that I hope we can address through this conference. How might participatory walking be used as a form of public sociology? How can walking help us (literally and figuratively) leave the ivory tower?

3 thoughts on “On sociological walking, without obsessing about the ‘sociological’”

The spiritual death of the digital age