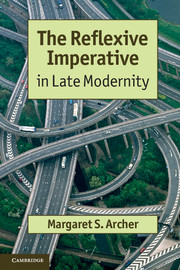 Contextual continuity obtains when the situations confronted by “one generation or cohort are much the same as they were for their predecessors” (Archer 2012: 20). Under such conditions “members know what to do because their repetition over time also means that appropriate courses of action have been defined intergenerationally – perhaps to the point of becoming tacit knowledge – and are readily transmitted through informal socialization” (Archer 2012: 6). This ensures a common experiential frame of reference and a low level of ideational diversity: conditions propitious to communicative reflexivity which are, in turn, reinforced by it given that ‘thought and ‘talk’ with ‘similars and familiars’ will tend to favour normative conventionalism. The reliance on others to complete and confirm deliberations reproduces the “norms of established custom and practice, because when they seek confirmation and completion of their initial thoughts and inclinations, convention is re-endorsed through external conversations” (Archer 2012: 21).

Contextual discontinuity obtains when social change begins to undermine the commonalities which are the basis for communicative reflexivity. At a macro level, Archer argues that discontinuity is produced by the “simultaneous circulation of negative, structure-restoring feedback and positive, structure-elaborating feedback for structural, culture and agential properties” (Archer 2012: 6). On a biographical level, the key feature of contextual discontinuity is the absence of the ‘similars and familiars’ who would be able to complete and confirm one’s internal conversation. The increasing particularism which has come to constitute their experience makes their reflexive deliberations difficult to communicate and inculcates a tendency towards pursuing those deliberations to their end in a purely self-contained way as autonomous reflexivity.

Contextual incongruity obtains when the intensification of social change means that “past guidelines become more and more incongruous with the novel situational variety encountered” (Archer 2012: 6). In a sense this can be seen as a radicalisation of discontinuity, such that the same process which precludes the emergence of durable commonalities of experience amongst the populace also increasingly makes the future intrinsically unpredictable. Under such conditions instrumental rationality, depending as it does “upon a calculability of pay-offs and sufficient knowledge about likely outcomes”, becomes increasingly untenable as a biographical strategy because “instrumental rationality cannot operate in an unpredictable environment where calculability goes out of the window” (Archer 2012: 35). So why does it still seem able to operate? Interesting answer below which I assume is a key thread running into the next book:

If the intensification of morphogenesis spells a precipitous reduction in calculability, and if that, in turn, is inimical to instrumental rationality, should not a sharp and equivalent reduction in the practice of autonomous reflexivity also follow? This would seem to be the logic implication, but in practice the conditions that lead to this conclusion were, until the 2007 financial crisis, fairly effectively contained by the powerful interests involved. Specifically, the multinational corporations and finance capitalists tackled the root cause threatening their activities, namely incalculability. The former moved to an ‘assurance game’ in order to stabilise key aspects of their environment in which they operate. What this basically entailed was a series of mutual agreements that enabled those whose operations gained them a market advantage to continue to benefit from it for a number of years. This is why legal patents became crucially important. They served to ‘freeze’ uncertainty and, in guaranteed profitability ceteris paribus, thus freed up internal resources to make the next innovative development which, if successful, would then be protected in the same manner. Calculability had been restored, the old game could continue with no more than the old absence of guarantees that new lines of research and development might turn out to be dead ends.

However, the assurance game was not applicable to key areas, the most crucial being the finance market, but the latter had effectively tackled the incalculability of risk, from its own point of view, until the house of cards collapsed in 2007. Up to that date, the insurance game complemented the assurance game. Thus, the complex development of financial ‘derivatives’ and hedge funds represented forms of insurance by spreading risk over a variety of investments. If the development of ‘derivatives’ rendered risks calculable for the biggest players, investment supermarkets performed something of the same function for those with surplus capital. Assurance and insurance provided insulation against the quintessential unpredictability of morphogenesis and enabled the old game to continue – pro tem.

They were complimented by other devices that manipulate consumption to ensure rising ‘demand’ and to underwrite increasing commodification. The proliferation of the credit card market, with a massive intensification of offers to transfer one’s balance (read: ‘debts’) to a new interest free card for a limited period, was a direct inducement to increase indebtedness, at an exorbitant interest rate, for those who frequently could not pay. An identical role was performed by sub-prime mortgages and unsecured loans. This complete reversal of cautious issuing and lending in the past, on the basis of established ‘credit-worthiness’ and earnings, artificially stimulated demand over an increasing range of products, from housing to holidays to cosmetic surgery, thus introducing greater stability in market demand and extending this to the tertiary sector.

Market and state collaborated in buttressing finance capitalism […] as the expansion of public services in terms of benefits and employment  kept ‘demand’ buoyant in European countries, which increasingly produced nothing but consumed more and more. Whilst ever the game went on and the devices for concealing the manipulative aspects of marketization became more sophisticated, so too could many continue to work on the basis of instrumental rationality in planning their courses of action in the hope of becoming better off. With its collapse, and a few of the most audacious financial players going under, European states were more concerned to re-establish ‘business as usual’ than to introduce stringent regulation of the financial services, which had replaced the production of goods as the source of national wealth. In other words, there are few grounds for supposing that the associated mode of reflexivity – autonomous reflexivity – would undergo a sudden and sharp decline.