This is a slightly crude attempt to thematise something which I’ve been struggling to express for a while: has there been an acceleration of the rate at which bullshit emerges in the digital economy? Here’s an example of what I have in mind. I’ve been looking through Amazon for business books about the newer social media and sharing economy companies for part of my new project. This is what I find when searching for Instagram in the books section of Amazon: 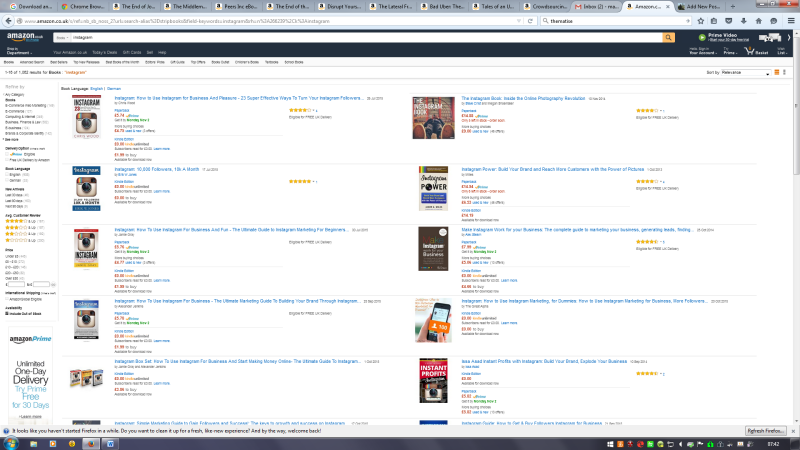 If you can’t read the screenshot closely enough, trust me when I say they look crap. What appear to be a uniformly substitutable array of questionably written books united by the underlying motif of how to get rich from Instagram. I’ve found something similar for almost every search I’ve undertaken in the last half hour.

The presence of many crap books on Amazon might not be a revelation. But what interests me is the motivations of those writing them. The buzz around a new platform presents an opportunity to establish oneself as a guide to that platform. But the nature of this buzz means awareness of that opportunity is almost as pervasive as awareness of the platform itself. The barriers to entry are minimal and the rewards appear to be great, particularly given the tendency of those who have ‘made it’ to “publicize successful outliers to propagate the illusion”. Furthermore, there’s a broader acceleration of the rate at which people seize on opportunities against a structural background of destructured careers and a cultural background of entrepreneurial individualism.

The result: we find ourselves drowning in an ever expanding pool of bullshit. The cognitive costs entailed by sorting the wheat from the chaff become ever more onerous, our reliance upon human and algorithmic intermediaries tends to increase as a result, making a small but meaningful contribution to the upwards spiral of individual distraction and collective fragmentation that I’m increasingly convinced is perhaps the defining characteristic of digital capitalism.