People who build castles in the air do not, for the most part accomplish much, it is true; but every man who does accomplish great things is given to building elaborate castles in the air and then playfully copying them on solid ground … Mere imagination would be indeed be mere trifling; only no imagination is mere. ‘More than all that is in thy custody, watch over thy fantasy,’ said Solomon. ‘For out of it are the issues of life.’

One of the most interesting aspects of Margaret Archer’s work on internal conversation is the role it assigns to daydreaming as a modality through which people change. Drawing on a reading of Peirce that is far from uncontroversial (the key influences here are Vincent Colapietro and Norbert Wiley) she understands this “imaginative anticipation” as a mechanism through which “we review and rehearse how we would act under novel circumstances and these action plans prepare the future self to execute them when a similar real conjuncture arises” (Archer 2003: 77). The point is not that this is the goal of daydreaming but rather that the activity indirectly prepares us through our experience of entertaining hypothetical novelty within the imaginative confines of our first-person experience. 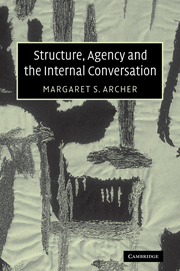 This has important implications for the common pragmatist notion that reflexivity only emerges as a response to situational novelty i.e. we’re thrown back upon reflection when habitual responses fail in confrontation with novel circumstances. Instead there is a relative independence of the mind because of our capacity to ‘confront’ novelty internally – it’s not a repudiation of the traditional pragmatist conception of how reflexivity and habit relate but rather an extension of it. Crucially, our daydreams rely on the “social variation and cultural variety available to ponder upon reflexively” (Archer 2012: 59-61). Our daydreams are furnished by the ‘raw materials’ which our social and cultural environment provides for us. But the fact we are able to furnish our inner lives with these ideational materials leaves interiority as an independent source of novelty over-and-above that which is situationally demanded by the circumstances we encounter. Peirce talked about this as ‘musement’:

Our musings can range far and wide to include daydreams or fantasies. Some persons, situation, or idea that has been encountered may prompt them, or they may be triggered by the task in hand. Musings are exploratory; they are ways of clarifying our aspirations and ambitions, our hopes and our fears, our orientations and intentions. Increased self-understanding is their product. These explorations are very much part of our private lives because they are unobservable, have no necessary behavioural outcomes and the understanding we achieve many be of precisely the kind that we do not wish to communicate to others. Nevertheless, through our musings, certain goals can be privately scratched form our personal agendas or they can internally reinforce our determination to see something through. (Archer 2003 100-101)

To give a sense of the implications of this for research, in my own PhD work which involved longitudinal interviews over two years, I made a great effort to get people to elaborate upon their ‘musements’. So if they made occasional remarks (e.g. “if money weren’t an issue I’d love to do X”) I’d just try and talk it through rather than let it drop out of the conversation. It’s a far from radical strategy in an interview but it’s something you become very sensitive to if you accept Archer’s argument about ‘musement’. The point is that “the uninhibited use of imagination is one way in which many people extend their horizons beyond their quotidian contexts and initiate a process of discernment about endorsing much bolder projects” (Archer 2007: 271). Much as with deliberation in general, it’s a faculty which is straightforwardly misrepresented if construed in entirely psychological terms* because its causes and consequences are intrinsically social. I think there’s more to be said about this but Archer’s account of musement’s significance focuses particularly on those ‘bolder projects’ which would,

alter their life courses if they could discount the costs and risks by bringing themselves to the point of commitment. Instead, there are very strong reasons why sharing one’s flights of fancy or inmost urges with a familiar interlocutor will invariably curtail them. Clearly, if the castle in the air is outside the shared context of the interlocutor, then the dialogical partner has nothing positive to contribute because it is beyond his or her experience. However, they can have plenty that is negative to say, ranging from the ‘Don’t be daft – get real’, to perfunctorily entertaining the attractions of being a famous footballer or pop star, yet quickly concluding, ‘It’d be great, but it’s not on is it?’ The problem of offering up one’s dreams (or nightmares) for outside commentary is that they are regularly cut down to size – the size that the shared context can accommodate, which thus serves to reinforce ‘contextual continuity’.

Cutting down to size also entails reminders of normative conventionality. Share your desire for savage revenge on an unfaithful partner and the likely response would be something like, ‘Sure, he’s a bastard but he’s not worth swinging for!’ Just as importantly, the internal, highly vitriolic outpouring of our recriminations in an imaginary conversation literally knows no bounds and we can derive considerable satisfaction from honing our insults into the most hurtful prose. Such mental activities may simply prove cathartic or constitute the stocking of one’s verbal armoury for possible future use; we can harden ourselves to the shocking nature of vituperation by internal repetition. But to share these phrases and formulae with a third party is to introduce an independent ‘ear’ which has the same effect as ‘the gaze’ of inducing shame. People find themselves climbing down, engaging in self-editing or adding modifications to withdraw the public sting.” (Archer 2007: 272)

*Though this is not to advocate a sociological imperialism which would deny the role of psychology in understanding such faculties. One of the (many) things I want to work on post-PhD is to try and flesh out this account of ‘internal conversation’ through an engagement with the social psych and cognitive psych literatures. Particularly the literature on ‘system 1’ and ‘system 2’ which, from my cursory engagements with it, make the equivalent sociological debate about reflexivity and habitus seem embarrassingly sterile.

Les Back on Digital Sociology

Does Žižek take himself as seriously as other people do? Idolatry, activism and the academic left