I first encountered the work of Rachel Hills in 2012, when she interviewed me for an essay in the Atlantic exploring asexuality. The conversation itself was incredibly stimulating and the ensuing piece of work was the best thing I’ve read about asexuality in the media. I’ve been waiting since then […]

Interview about #asexuality for an Italian magazine

What is asexuality, and what are the social causes of asexuality? Asexuality is usually defined as ‘not experiencing sexual attraction’, though it’s important to recognise that not everyone accepts this definition and some extend it to include a low or fluctuating experience of sexual attraction. This is distinct from celibacy, […]

The Invisible Orientation: An Introduction to Asexuality

In the last few years my interest in asexuality has shifted from a concern with the experience of asexual people to a preoccupation with why those who aren’t asexual find it as confusing as they do. This can seem to be a confusingly niche interest, or at least I occasionally worry […]

Call for contributors: relaunch asexualitystudies.org as a group blog

Asexuality and Sexual Normativity: An Anthology 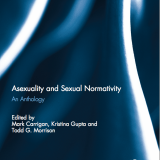 The last decade has seen the emergence of an increasingly high profile and politically active asexual community, united around a common identity as ‘people who do not experience sexual attraction’. This unique volume collects a diverse range of interdisciplinary empirical and theoretical work which addresses this emergence, raising important and […]

The audio of the woman’s hour interview I did

This has just been posted up on youtube courtesy of the asexuality media archive.

In this paper I explore the role of sexual categories in the lived experience of contemporary young people through a case study of the asexual community. While still representing a relatively small area of research within contemporary sexuality studies, asexuality (commonly defined as people who do not experience sexual attraction) […]

In the last decade, a growing number of individuals, self-identifying as asexual, have come together to form asexual communities. According to the largest asexual community, an asexual individual may be defined as a person ‘who does not experience sexual attraction’ (http://www.asexuality.org/home/overview.html). However, the straightforward nature of this definition masks the […]

“How do you know you don’t like it if you haven’t tried it?” : Asexual Agency and the Sexual Assumption

In this chapter I critically engage with existing work on asexuality and develop an account of the ethical, theoretical and methodological issues inherent in asexuality research. I utilise the work of the social theorist Margaret Archer to explicitly articulate a theoretical model within which the experience of asexual individuals can […]

There’s more to life than sex? Difference and commonality within the asexual community

Asexuality is becoming ever more widely known and yet it has received relatively little attention from within sociology. Research in the area poses particular challenges because of the relatively recent emergence of the asexual community, as well as the expanding array of terms and concepts through which asexuals articulate their […]

Asexuality and Its Implications for Sexuality Studies

This is a pre-print of a paper published in Psychology of Sexualities Review, Vol. 4, No. 1, Autumn 2013. A copy of the final article can be obtained here.  While asexuality is usually defined as ‘not experiencing sexual attraction’ amongst those who self-identify as asexual , the question ‘what is asexuality?’ […]

As the AVEN website describes, “in a world where sexuality is promoted as the norm, many asexuals grow up thinking that they’re somehow sick, broken or deficient” (AVEN, 2011). This raises the question of the nature of this norm, as well as how it is formed and propagated. Why would […]

The Ambiguity of (a)Sexual Categories

The situations one faces in negotiating intimate life without a desire for sexual activity foregrounds the centrality of the sexual assumption in the conceptual apparatus culturally available for making sense of human intimacy and human sexuality. Without the assumption of sexual desire, the salience of intimacy concepts begins to break […]

Asexuality as a Spectrum: A National Probability Sample Comparison to the Sexual Community in the UK

This came through on the Asexuality Studies mailing list – posted here because of the likelihood some not on the list might want to read it: I have finished my Master’s Thesis: Asexuality as a Spectrum: A National Probability Sample Comparison to the Sexual Community in the UK The final […]

Interested in Asexuality Studies? Everything you need to get started contained within

This is the outline for the special theme issue of Psychology & Sexuality which I edited with Kristina Gupta and Todd Morrison. It was published in March 2013. The editorial and the ‘virtual discussion’ are open access (i.e. freely available without a university library subscription to the journal) until the […]

The aforementioned transformations in the socio-cultural and the cultural system are generalisable beyond the particular experiences of asexual individuals. Some have suggested that the heterogeneity which manifests itself through the Internet precludes generalisation. For instance Gauntlett and Horsley (2004: 28) argue that the diversity of material available online means that […]

“Spotlight on Asexuality Studies” was a groundbreaking event hosted by the Identity Repertoires/Mind the Gap research group in the Department of Sociology at the University of Warwick, UK.  Academics, activists, community members, therapists and students gathered in the university library and online to discuss contemporary asexual research, with papers presented […]

Most of us see ourselves as living in a sexually liberated age. Having thrown off the shackles of prejudice and prudishness, we believe ours is an enlightened culture where we tolerate sexual difference and value sexual choice. Yet are we as well adjusted about sex as we tend to think […]