Anthropological shocks occur when many populations feel they have been subjected to horrendous events that leave indelible marks on their consciousness, will mark their memories forever, and will change their future in fundamental and irrevocable ways. Anthropological shocks provide a new way of being in the world, seeing the world […]

The ontological gap between entities and interaction 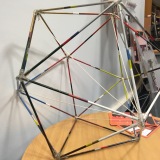 Another theme which feels important to me in Pickering’s superb The Cybernetic Brain is the ontological gap between entities and interaction. If we imagine the world as composed of discrete entities with defined characteristics, it invites an approach to knowledge in which we merely place them into a taxonomy in a […]

It’s very easy for the idea of human flourishing to become individualistic. If it’s being advocated as an alternative to subjective well-being, its status as an opposition encourages what Andrew Sayer calls a PoMo flip: a problematic conceptual structure is retained while dichotomies are reversed. In this case, ‘well-being’ as […]